On 6-8 November 2018, the Sudanese Journalists Union (SJU) with support of the UNESCO Khartoum office organized the Safety Training for Women Journalists of the North of Sudan in Ed Damer, River Nile. 20 women from different media and media related institutions were trained to manage their personal risks of being violated. The Safety Programme for Women Journalists in Sudan was created by the UNESCO Khartoum office in 2016, and funded mainly by the International Programme for Developing Communications (IPDC). In 2017, the Dutch and Italian Embassies also contributed to the Programme to the benefits of Sudanese Female Media Workers.

The Commissioner of Ed Damer expressed his satisfaction by the partnerships of SJU and its care about out-of-capital members, thanked UNESCO for its support to capacity development for women journalists in states, and underlined importance and his personal interest in women’s empowerment. The Director of the NISS in River Nile state expressed his full commitment for cooperation with SJU and UNESCO, thanked women journalists for their work and participation, asked for more trainings to be conducted in states, and committed his full openness toward journalists to help them in their career. He also praised the safety programme, which addresses the urgent needs with respect to risks encountered by all journalists in general, and women journalists in particular. The SJU President Representative hailed cooperation with UNESCO Khartoum and expressed his commitment to support the partnership through Women Affairs Department of the SJU. He also underlined importance of women presence in the industry, confirmed their success, and expressed his satisfaction, that SJU can pride itself for the fact that the women safety program recently is the biggest and most successful among SJU’s programs. 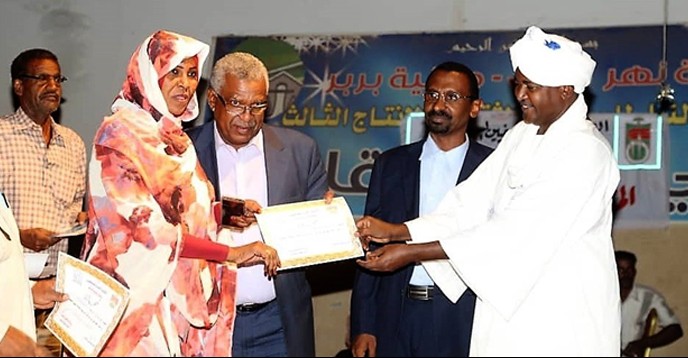 The closing graduation ceremony, which took place at Berber Locality, was honored and addressed by the Governor of River Nile State, Mr. Hatim Al Waseela, President of SJU, Mr. Alsadig Alrizagi, Commissioner of Berber Locality,  Mr. Abdel Monem Elsayem, and the Director of River Nile State Radio & Television Station. Many other participants of the ceremony welcomed 20 graduates, who received their certificates. Than all enjoyed by an excellent entertainment program.

1. Raising gratitude to UNESCO for this very good capacity building program, and encourage it to come with more trainings for journalists in Sudan.

2. Enhancing further cooperation with UNESCO, involving more women-journalists in it, and providing informational support to other UNESCO’s projects in the country.

3. Launching an electronic newsletter on behalf of women journalists supporting women's issues and activities in which UNESCO works.

4. Emphasizing the importance of training for women journalists and the need for continuity; developing other training programs to raise the capacity of female journalists.

6. Launching a regional association for women journalists of Northern Sudan regularizing it under umbrella of the SJU.

7. Inviting experienced women journalists of the national level share their experience with their peers in states.

8. Lifting restrictions on journalists’ free movement over the country to carry out their professional mission.

9. Raising voice against usage mercury in gold mining – due to its influence on health of people and environment.