Lake Chad: UNESCO promotes the consideration of the ecological crisis at the Berlin Conference

UNESCO and the partners of the Biosphere and Heritage of Lake Chad (BIOPALT) project participated in the High-Level Conference on the Lake Chad Region held in Berlin from 3 to 4 September. On this occasion, UNESCO emphasised the need to address the ecological crisis together with the humanitarian and security crises in order to reduce poverty and promote peace and development in the Lake Chad basin.
Participants of BIOPALT project meet by lake Chad
S. Moriset
All right reserved
September 7, 2018

The conference was jointly organised by the governments of Germany, Nigeria and Norway and the United Nations. It brought together 27 countries, 27 international and regional organisations, as well as civil society representatives. They pledged to work together to meet the humanitarian needs of the more than 17 million people still affected by the regional crises and strengthen their resilience. The Conference welcomed the progress made since the Oslo Humanitarian Conference in February 2017 on scaling up humanitarian assistance, crisis prevention and stabilisation, development and cooperation. In total, pledges of financial support exceeded US$ 2.17 billion in grants and US$ 467 million in concessional loans.

The partners of the BIOPALT project were mainly the Lake Chad Basin Commission (LCBC), the African Development Bank (ADB), and representatives of the governments and civil society from Nigeria, Niger, Cameroon and Chad. In his speech, the UNESCO representative underlined the specificity of the BIOPALT project, which mobilises UNESCO's multidisciplinary expertise in the fields of water, biosphere reserves and world heritage. He emphasised the ambition of this project to take a different look at Lake Chad, a more positive one, because this common good abounds in exceptional biodiversity and is charged with a thousand-year-old cultural heritage. The aim is to promote the knowledge, conservation and development of Lake Chad's ecosystems in order to contribute to the reduction of poverty and conflicts in the region.

As an example, the UNESCO representative mentioned that the ecological restorations that will be carried out in the BIOPALT project, following the principles of biosphere reserves, will provide local responses to the global challenge of climate change and will contribute to mitigating conflicts over the use of water resources and to improving the livelihoods of local communities, in particular women and youth. He mentioned other UNESCO approaches that will be implemented in the BIOPALT project such as the prevention of violent extremism, and the promotion culture of peace and intercultural dialogue through notable the Potential for Conflict to Cooperation Potential (PCCP) initiative. Finally, he stressed the need to develop a holistic approach to crisis management in Lake Chad, taking into account ecological and cultural issues. 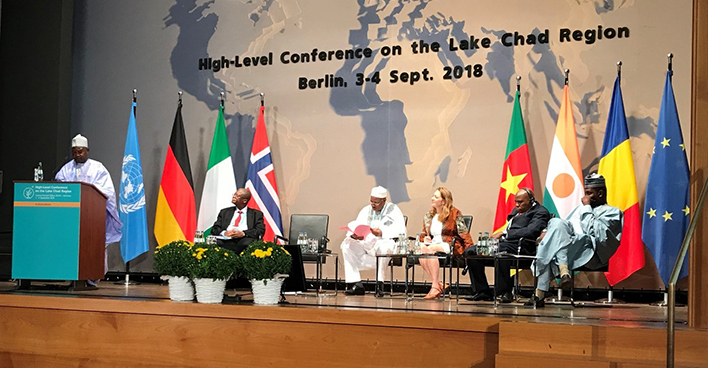 SDG 15 - Protect, restore and promote sustainable use of terrestrial ecosystems, sustainably manage forests, combat desertification, and halt and reverse land degradation and halt biodiversity loss
SDG 6 - Ensure availability and sustainable management of water and sanitation for all
SDG 16 - Promote peaceful and inclusive societies for sustainable development, provide access to justice for all and build effective, accountable and inclusive institutions at all levels
SDG 17 - Strengthen the means of implementation and revitalize the global partnership for sustainable development