Exploring joint UNESCO-Italy initiative for Empowering Women in Sudanese Media, the Deputy Ambassador of Italy, Ms. Valeria Romare, and UNESCO Representative to Sudan, Mr. Pavel Kroupkine visited Kassala on 27-28 September 2017. The reason for the visit was the closing ceremony of the Safety Training for Female Journalists, funded by the Italian Embassy in Sudan.

The joint UNESCO-Italy initiative for Empowering Women in Sudanese Media started in 2016 with debates in May 2016, where about 200 women – media professionals exchanged their view in female career in Sudanese Media. The project on strengthening rural radio broadcasting in Eastern Sudan, which was entrusted by Italy to UNESCO in November 2016, has the empowering women components. Finally, the Kassala’s Safety Training for Female Journalists, funded by Italia Embassy, took place in Kassala, Sudan, on 25-27/09/2017. The training session was organized by the Sudanese Journalists Union (SJU) – being a part of the country’s initiative of the International Programme for Developing Communications (IPDC) and UNESCO Khartoum office. Twenty four women-journalists were trained to manage their personal security risks – from Kassala, Gedaref and Red Sea states. This was the sixth training of the series initiated by UNESCO and IPDC. First training took place in Khartoum in February-March, second – in Wad Medani in April, third and fourth – in El Fasher and Ed Damer in May, and fifth – in Nyala in August.

The visitors were warmly welcomed by the acting governor of the Kassala state, Mr. Magzoub Abu Ali with other state officials, who also honored the ceremony of presenting certificates in the city’s theater. 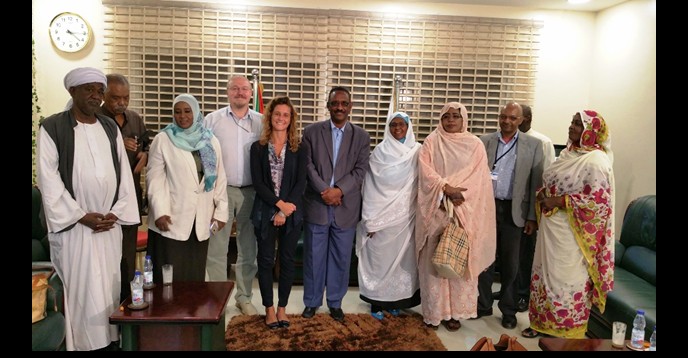 Next day, Ms. Romare and Mr. Kroupkine visited the State Radio exchanging with the Director of the Kassala Radio, Mr. Hayder Osman, views on the status of the mentioned above project on strengthening rural radio broadcasting in Eastern Sudan.