Finish of the Project “Safety Training for Women Journalists in Sudan”

On 5 December 2017 the Sudanese Journalist Union (SJU) with support of the UNESCO Khartoum Office organized a workshop to make a lessons learned exercise from the project “Safety Training for Women Journalists in Sudan” which took place in February-November 2017. About 30 women-journalists from different states of Sudan, who passed the training, together with SJU’s trainers, training managers, and Union managers looked at the story as a whole, doing lessons learned exercise and capitalizing the experience gained. 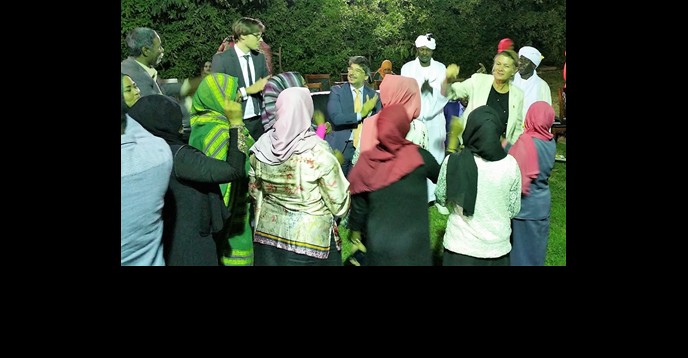 Closing ceremony for the finalizing workshop for the Project “Safety Training for Women Journalists in Sudan”, 05/12/2017, Premises of the Sudanese Journalist Union, Khartoum: Break for entertainment.

The closing ceremony of the workshop was honored by H.E. Dr. Karin Boven, Dutch Ambassador in Sudan, H.E. Mr. Fabrizio Lobasso, Italian Ambassador in Sudan, H.E. Dr. Pavel Kroupkine, UNESCO Representative to Sudan, Mr. Rene Kersten, 2nd Secretary in Dutch Embassy, Mr. Alsadig Ibrahim Alrizagi, President of the SJU, and other members of the Executive Committee of the SJU. The distinguished guests expressed their satisfaction by the project results and ensured further support to the initiatives in an area of Empowering Women in Sudanese Media.

The project “Safety Training for Women Journalists in Sudan” was initiated by the UNESCO Khartoum Office with support of the International Programme for Developing Communications (IPDC), and, in February-March 2017, started with adjusting materials on safety for women journalists to the Sudanese context, which was made by Dr. Abeer Saady together with members of SJU’s Women Department – resulting in a 3-day training course.

Then, SJU started the training deployment in the Sudanese states, which was managed by Ms. Hadia Ali, Head of SJU’s Women Department. In parallel the initiative gained support from UNAMID, and Dutch and Italian Embassies in Sudan, which allowed to make in a whole 7 training sessions with participation of 154 women-journalists across all Sudan.

The training sessions took place in:​